5 Animals to look out for on a Kenya Safari Trip

At Natural World Kenya Safaris, we are a holiday safari tour operator who genuinely take great pride in providing safari tours and local excursions covering Kenya, Tanzania and other safari hotspots throughout Africa. Our most popular safari options are the famous Nairobi to Nairobi safaris with Masai Mara game reserve destination, particularly at the time of the Great Migration in late July to mid-August, when thousands of wildebeest and other plains animals migrate across Kenya & Tanzania East in Africa in search of food and water. Although the Great Migration is renowned as the great migration of zebra and wildebeest, you’ll see many different types of animal on your wildlife safari trip.

A Kenya Wildlife safari is not just about the Big Five, as well as looking out for the big 5 game animals, you’ll see a variety of other  animals on a Kenya Safari Trip at the time of the Great Wildebeest Migration:

It would be hard to miss an elephant whilst you are on safari. Found only in Africa, there are two species of African elephant to look out for on your adventure: The bush elephant and the forest elephant. 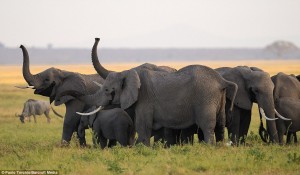 The African Lion describes many species of lion found in Africa. Lions are the second largest cat, after the tiger and are one of the big five game animals people look out for on safari. On a Nairobi and Mombasa Kenya Natural World Safari, you can expect to see lions lounging on the marshes at the time of the Great Migration. Take your pick from our selection of Nairobi safari tours.

The Buffalo is a member of the Big five animals. It is wild and aggressive in nature and live in a herd.  They are known to kill lions when in a group especially to protect one of their own when attacked by the lions as a meal.

Its is among the endangered spieces of wild animals in Kenya for illegal trade in horns. There are two types of Rhinos in Kenya, The Black Rhino and White Rhino.

A female Rhino can give birth once every 5 years and that is the reason their population is low. Most of the Rhinos in Kenya are protected in sancturies and national parks.

Leopards are graceful and powerful big cats closely related to lions, tigers, and pumas. They live in sub-Saharan Africa, upper east Africa, Central Asia, India, and China. Be that as it may, huge numbers of their populaces are imperiled, particularly outside of Africa.

Find the perfect tour for your family in time for 2021 adventure, check out the full range of Kenya safari holidays.

Check out more of the wildlife you can expect to see in Kenya  including:-

Migrating animals must cross the Maasai Mara river in order to reach the nutritious land. On the crossing, you can expect to see crocodiles snapping up the zebras and wildebeest as they attempt to move forward on their migration. Crocodiles are large aquatic reptiles that live in Africa, Asia, the Americas and Australia.

Zebras are social animals that live in groups, whether this is a small harem (consisting of one or two dominant males, a small number of females and their offspring) or large herd. Their stripes come in different patterns that are unique to each individual. There are actually three species of zebras. These are: The Plains zebra, the Grévy’s zebra and the mountain zebra. Plains zebras live in south and east Africa, although the species is in decline, they are usually found on treeless grassland and savanna woodland. One of the best areas for viewing grassland plains wildlife, have you considered a Maasai Mara safari holiday?

Wildebeest often graze in herds with Zebra, for heightened awareness of prowling predators.

See the Great Wildebeest Migration with Natural Tours and Safaris

To book your dream Kenya safari trip, contact us at Natural World Tours and Safaris. A member of our safari team shall get back to you within 12 hours to help you book your once in a lifetime trip. Alternatively you can call us on +254 704 001 122 to speak directly with a member of our team.