Six Most Unusual Safari Animals You Can See in Rwanda

No safari to Rwanda would be complete without a trek to see its mountain gorillas. You’ll find one-third of the world’s population of these fascinating apes in the country’s richly forested hills.

But take a closer look at the wildlife on your journey, for Rwanda holds many colourful and intriguing species of birds, monkeys, antelope, and even lizards.

They range in size from substantial to tiny, but each holds a special place in this unique eco-system and will only make your safari richer for experiencing them.

Topis are a unique type of antelope, with a humped back, elongated head, and dark purple patches on their upper legs. They can also be quite large, up to 160 k. (353 lbs.). They frequent grasslands and can be found in Akagera National Park.

The topi has a very diverse and organized social system. An alpha male dominates the territory or lek, inhabiting its center. Females will enter the area to mate and may even compete with each other to be with the dominant males.

The mantled guereza, also known as the eastern black and white colobus impresses with its unique patterns of black and white fur on its face and body. Its long fringe of white hair drapes over an otherwise black body.

Living close to rivers and lakes, it feeds on leaves, seeds, fruit, and some insects. Known for its morning chorus, the males roar in a form of communication that establishes their territory. The calls can carry over a mile and neighboring males may roar back in response creating an entertaining jungle cacophony. 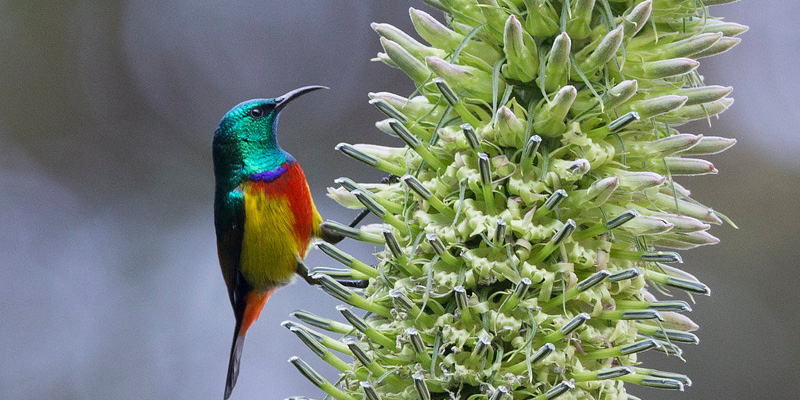 If you should spot a colourful tiny bird with a bright green, iridescent head and a bold red and yellow breast, you’ve found the regal sunbird. A beautiful addition to any journey, the regal sunbird inhabits montane forests, usually at elevations from 1,500 to 3,100 m (4,900 – 10,200 ft) above sea level.

Its vocalizations are also colourful, with a long and warbling song. Though the regal sunbird’s population may be declining, its numbers are still so plentiful that it is not considered to be vulnerable or threatened.

The extraordinary Hamlyn’s monkey appears as half-monkey, half-owl, hence its alternate name, the owl-faced monkey. It sports a characteristic white stripe, extending from the nose to the upper lip giving it a distinctive owl-like look.

Though rare, it can be found in the dense high-altitude – 900 – 4,500m (3,000 – 15,000ft) – bamboo forests of Rwanda. It is a frugivore, preferring fruits, roots, nuts, and seeds. Hamlyn’s monkeys live in small groups of about ten members with one male and multiple females. 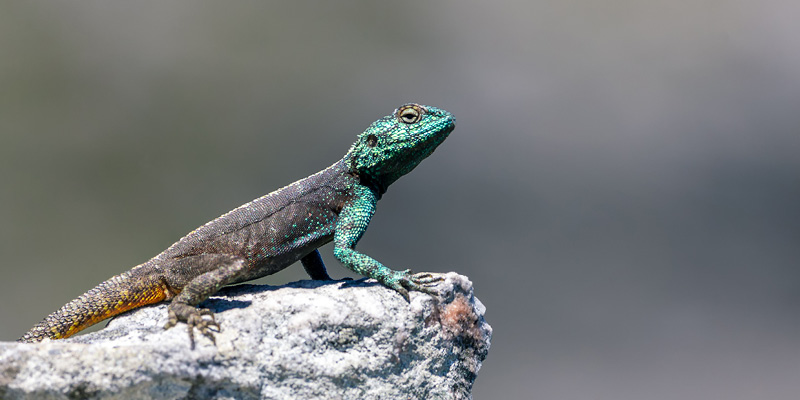 There are many varieties of the agama, amongst them the red-headed, the rainbow, and the blue-headed. This last is startling in appearance with a bright iridescent blue-green head and forelegs, fading to a brown/orange body and tail.

Its color can also change or fade depending on circumstances – if it has been dominated, caught, or even just alarmed. The males can be aggressive, even taking chunks off each other’s tails. The females, too, may fight each other and sometimes initiate courtship with the male, inviting him to chase and catch her. 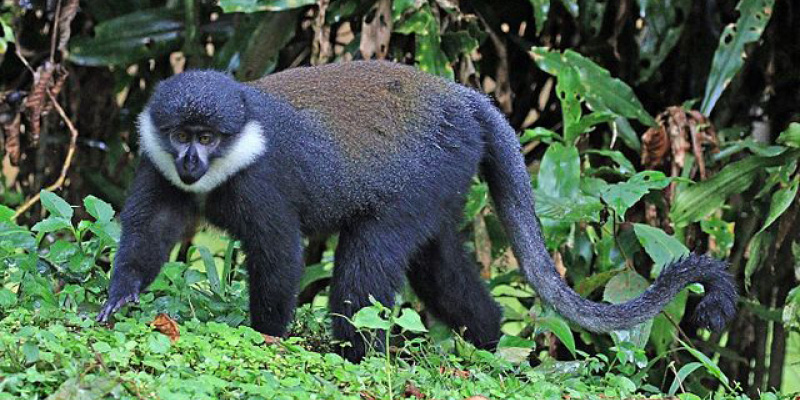 An unusual monkey you may come upon in the highland forest with its distinctive white beard, the L’Hoest monkey is certain to catch your attention. Living in small groups of females, the males will only stay with the group for short periods of time.

L’Hoest monkeys sleep in trees, sitting and holding branches or each other for stability. Females usually give birth at night but all the females in the group will take an interest in the newborn, trying to hold it. The L’Hoest Monkey has been known to live for up to 30 years.

Embark on a Rwanda Safari Tour!

Rwanda is a special place to appreciate Africa’s plentiful variety of wildlife. If you would like to learn more about this nation, we have put together a handy Rwanda travel guide.

Let Natural World Kenya Safaris show you the magic in this dense, green jewel of a country. We’ll arrange gorilla trekking and safaris personalized to your liking.