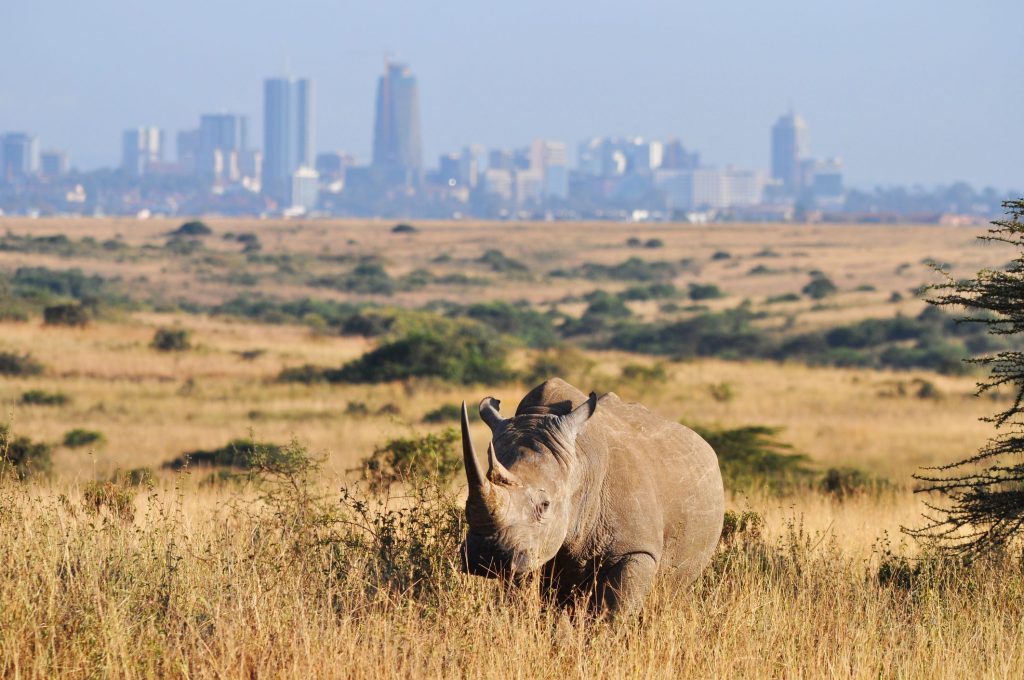 It’s probably the most unique national park in the world. Where else can you spot lions, rhino, buffalo and giraffe just minutes from a national capital city?Only 7 km (4 mi) from the heart of downtown, Nairobi National Park is a wonder of wildlife in a grassland setting but framed by the skyscrapers of bustling Nairobi in the background.

It’s Kenya’s first national park and so accessible that you can take a 1 or even ½ day trip there, see more wildlife than most places in the world, and be back in town for dinner.

Within view of airliners coming in on their final approach, it is possible to spot 4 of Africa’s “Big Five”, plus cheetah, leopard, gazelle, hyena, impala, zebra and ostrich… all in the wild.

Birdlife in the park is plentiful – especially in the wetlands with over 400 species amidst pods of hippos.

The park also features the highest density of black rhino in Kenya as it functions as a rhino sanctuary. In fact, the park has been nicknamed “Kifaru Ark” – kifaru is Kiswahili for rhinoceros.

It is not unusual to see the locals enjoying their nearby park, and it’s a regular stop for Nairobi schoolchildren on class trips.

You too can easily partake of the numerous hiking trails, picnic spots and even campsites in this unusual refuge so close to the city.

And there are some very special reserves within the park that you won’t want to miss. At the David Sheldrick Elephant Orphanage, baby elephants and rhino calves are rescued and cared for. Feeding times here are always an exciting and joyful event for man and baby animals alike. 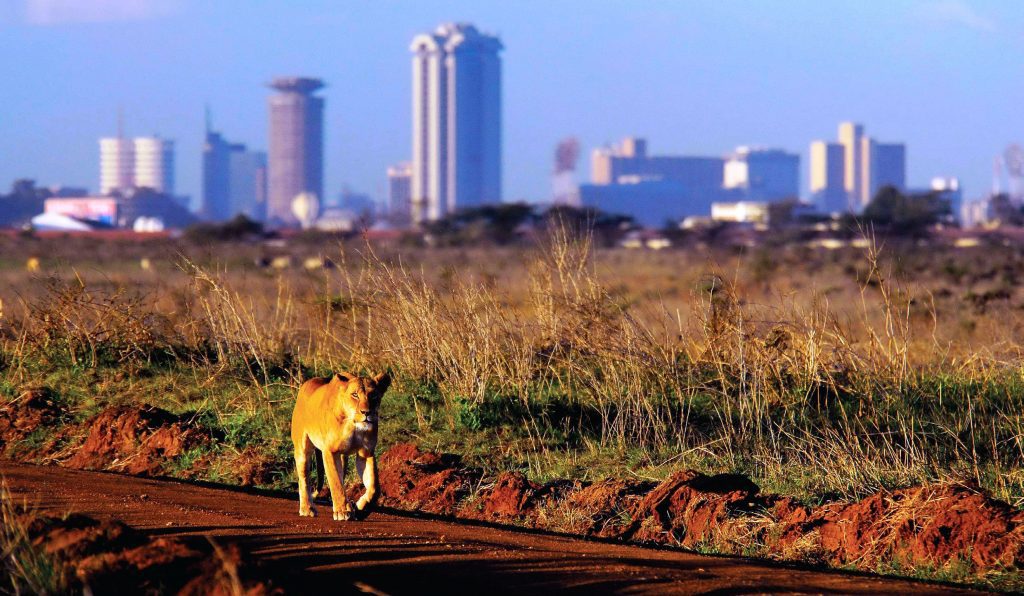 Here too, in this refuge just minutes from a world capital, you can witness the annual wildebeest and zebra migration – an astonishing juxtaposition of modern man and the eternal rhythms of nature.

The park is only about 30,000 acres or 117 sq. km (45 sq. miles), one of the smallest of Africa’s parks. But the great amount of wildlife here is surprising considering its proximity to a major city.

Just 7 km south of Nairobi, it’s a quick getaway from the capital city.

The park is generally dry except during the rainy season. Average day time temperature is 22oC/72oF.

The park is open year-round and always accessible. Visitors must enter the park in a vehicle.

The best wildlife viewing is during the dry season (July – March). The rainy season (April – June) presents some difficulties on the wet roads.

By road – from Nairobi’s center travel via Langata Road. You can book a full day or half day excursion with Natural World Kenya Safaris.

This massive annual migration occurs from July to October when thousands of animals are on the move, searching for water and sustenance. The best times to view this incredible event is July and August.

The park is known as a valuable sanctuary for these endangered creatures. The breeding program has been so successful they supply black rhinos to the other national parks.

This sanctuary rescues injured and orphaned baby elephants. Its experienced handlers nurture the babies back to physical and emotional health and eventually release them back into the wild.

At this historic site, hundreds of tons of intercepted ivory have been periodically burned to show Kenya’s commitment to the eradication of the ivory trade and the protection of its elephant population.

The site is also visually inspiring with spectacular views of the plains below.

On these maintained trails, see the park and its smaller wildlife up close. There are also several picnic sites.

Truly one of the easiest parks to visit, it is also perhaps the most unique. Have breakfast in the city, then safari amongst lions and rhinos an hour later! With cityscapes framing your wildlife photos, you’ll have wonderful mementos of your visit here.

Join us on safari to Nairobi’s main tourist attraction for a ½ or 1-day visit. Make your visit here the start of your safari journey throughout Kenya. We have safaris departing from Nairobi for 1 to 12-day tours.