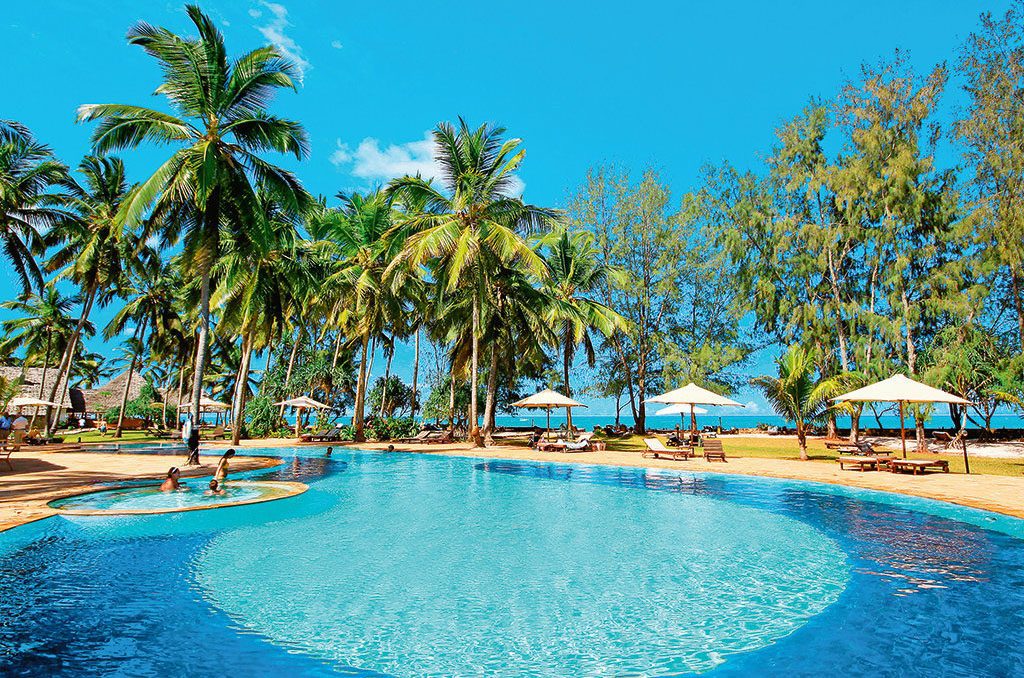 Nothing is typical in Zanzibar. Home of some of the best beaches and diving in the world, it is actually a string of islands sitting off the coast of Tanzania. The islands are awash with culture, history, and magnificent coasts under swaying palms. Come here to relax, explore, and feel the vibe of a different sort of Africa.

Sometimes known as the “Spice Islands” – producing clove, nutmeg, cinnamon, and black pepper – this unique archipelago is part of Tanzania… but is also somewhat independent, semi-autonomous.

The largest island and the epicenter of Zanzibar is called Unguja, but most just refer to it informally as Zanzibar Island. This is the home of the historic old quarter called, Stone Town, a World Heritage site. It is a former trading center characterized by winding passageways, mosques, colonial forts, palaces, and museums.

But a short walk will bring you to a world of perfect beaches resting between tiny fishing villages. Fronting the aquamarine of the Indian Ocean, you can while away the days on these shores relaxing in your own perfect haven.

Perhaps the heart of Zanzibar Town, this historic quarter is a fascinating maze filled with history and the influences of African, Arabian, Indian, and European cultures. Treading these narrow streets will take you to museums, palaces, cathedrals and more.

Old Fort – built by invading Arabs over 300 years ago, its large ramparts overlook the ocean. At one time a prison, it features an open amphitheater and Cultural Arts Gallery, where you can view local art.

Palace Museum – built as a sultan’s palace, this series of buildings set on the waterfront exhibits many artifacts of the royal era – portraits, thrones, and great tables. Adjoining the museum rests the tombs of several sultans.

Princess Salme Museum – a little jewel box of a museum it is dedicated to the story of Princess Salme who chronicled her elopement with a German merchant in her Memoirs of an Arabian Princess from Zanzibar.

Anglican Cathedral – its spire rising above the surrounding neighborhood, this was the first Anglican cathedral built in East Africa in the 1870s. Inspired by the famous explorer David Livingstone, the church’s crucifix is made from the tree that stood over his burial site in Zambia.

Outside the building is the poignant Slave Memorial, a work showing slaves trapped in a pit below the ground – a reminder of the Zanzibar’s slave markets of the past.

House of Wonders – it lives up to its name with its tiers of balconies overlooking the sea. Built by a sultan in the 19th century it featured marble floors and the marvel of electricity, certainly a wonder in its day. One of the most impressive buildings on the island.

Forodhani Gardens – a lovely space by the water, locals and visitors mix at the restaurants and cafes here. There’s also a children’s park and food stalls open during the evening.

The Parks of Zanzibar Island

You’ll find more of the natural world here than just stunning beaches. In the island’s reserves and parks, you’ll discover endangered species of land and sea creatures, nature trails, and many kinds of birdlife.

Jozani-Chwaka National Park – a large forested area that also harbors lush marshes with ferns and thick trees. This is the home of several endangered species like the Zanzibar red colobus monkey and also bushbabies, duikers, and a rich array of birds.

Enjoy the forest nature trail or the boardwalk taking you through mangrove fields.

Every February, the locals and tourists come out to assist the hundreds of turtle hatchlings in their quest to cross the beach and make it to the sea.

The Other Zanzibar Islands

Although there are many islands in the Zanzibar archipelago, neighboring Pemba and Mafia Island are the largest and most known. Not nearly as popular as Zanzibar Island, nevertheless, they too offer stunning beaches and beautiful marine life.

Pemba Island – known as the “Green Island”, Pemba is hillier, lusher, and quieter than its sister island. The diving and snorkeling here are excellent due to vivid displays of rich marine life. Just a 40-minute flight from Dar es Salaam, Pemba produces most of the clove crop of this region.

Mafia Island – the third largest of the islands, it is south of Zanzibar and was a trading hub for Egypt, Rome, Portugal, and Greece in times past. It’s also a fairly untouristed island and offers equally extraordinary diving. Look for whale sharks as well as humpbacks that use this area as a breeding ground.

Your Visit to Zanzibar

This is a unique world, off on its own, apart from the rest of Africa. Immerse yourself in the culture, history, architecture, and unforgettable waters of Zanzibar.

The beaches are spectacular as is the easy vibe out here in the Indian Ocean. Natural World Kenya Safaris offers tours of this special paradise. Just contact us for a different kind of African holiday. Let’s talk and we’ll create a customized vacation to exotic Zanzibar, just for you.